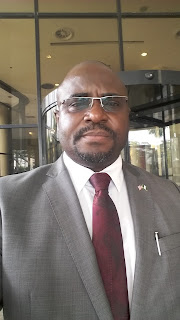 Ononugbo Alfred
writes on the destruction of the United Nigeria.

In the past few days, I have been reading the records of the military coup and counter coup of 1966 which took place just few days before I was born on the 9th of August.
Sadly, I Painfully must admit that the actions of few Nigerians which would have had no serious consideration were they not involved in the leadership and decision making positions over the interest of Nigeria have remained a sour and agonizing reference in the administration of the Nation.

First was the coup led by young military officers driven by zeal and their interpretation of patriotism, one united Nigeria irrespective of tribe, creed or religion. I understand from records that the political class were becoming wasteful and insensitive at the time. Some were beginning to breach their oath of office and public service as well as neglecting their constitutional obligations and so were numerous versions of the accounts of events then.

By the end of their push, the interpretations were not favorable to their actions and these generated reactions from parties whose interests were not served. In leadership motives does not determine opinions rather, informed and well communicated objectives, guides responses. Notable political figures who were alleged to have compromised national interests were victims and subsequently unanticipated and fatal consequences has visited the entire nation ceaselessly since then.

What followed as recounted by some participants in the coups was the revenge against the perpetrators and the decision to cleanse the systems from those with the potentials for immediate or long term harms. The chain of trust which once held the diverse ethnic blocks together was melted by the fervent heats of anger and hatred which followed the initial plot. Generations have continued to be born and nurtured on the falsehood, dogma, doctrines of distrust and hate provided by religion, politics and self ambitious platforms.

I wish to mention here that the consequences of destroying human lives serves no quick resolutions in conflicts. Shedding of human blood deepens hostility and drives hatred to such  that cannot be specifiable. 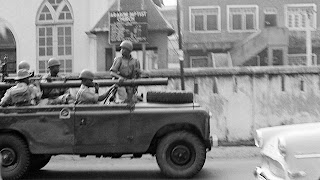 This should sound a note of warning to all groups anywhere in our society involved is activities that destroy human lives. The infractions of over 50 years have defied reconciliation and divided Nigeria more than it has promoted virtues that sustain unity. The regionalization of Nigeria and later creation of States and local administrative councils, still fans the ambers of irreconcilable differences.  Some individuals with vested interests rather that mutually beneficial objectives seize the structures of administration manipulating the majority of Nigerians through religion and political parties arrangement to sustain their fraud. These informs why there has been no visible development in Nigeria after 50 years. None might possibly be in view as groups after groups resorts to stealing, killings and destructions hiding under the ethnic mantra. (SKD) These three monsters have formed the pillars on which Nigeria revolves. Almost every news about our country in more than forty years never exceeds SKD related forcing positive strides of everyday Nigerians to obscurity because of the social placement of those involved.

WHAT IS THE WAY FORWARD?

I wish to read reactions from patriotic Nigerians who are sober and sincere. Our silence most times deny our society of the truth and godly counsel which should provide reflections before decisions of national importance are taken.

I am aware that many coups and attempted ones have taken place in Nigeria and each of these sets Nigeria and Nigerians back by many de-stabilizing steps economically, politically and even socially. Institutions like the public services, religious and cultural affiliations have since assumed the status of fatal tools deployed by the mindless predators to ice their self serving agendas. Unfortunately we have become so scared and intimidated to speak the truth and stand by things that are right. Ethnicity has taken the driver's seat in considerations of national and even local affairs while the phobia of retribution and contempt remains the order of the day. Sycophants and hypocrites whose only stock in trade is to massage the venomous characters of unpatriotic political jobbers lobby and grab political positions that serves their subversive and criminal intentions.

I recall the psalmist proclamation about the Isrealites;
By the rivers of Babylon
There we sat down, yea, we wept, when we remembered Zion.
We hanged our harps upon the willows in the midst thereof.
For they that carried us away captive required of us mirth, saying, sing us one of the songs of Zion.
How shall be sing the Lord's song in a strange land?
(Psalm 137: 1-4 KJV) 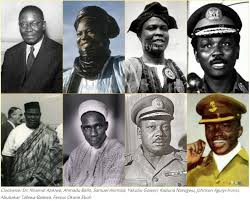 These foes unfortunately grew from young army officers to adults and transformed from ethnic advocates to national leaders and cultivated the most unimaginable enmity ever. They continued the pursuit of the divisive and control agenda over the years telling lies and half the truth to generations of Nigerians who today build upon such to do greater harm to our evasive United Nigerian arrangement. If Nigerians have enemies today, they were the group of young military officers who personalized the Nigerian projects and the wealth of the Nation which is still in their custody, their partners in crime and that of their cronies.  Most of the young men who participated in these coups still control the resources of Nigeria and shall not let go unless they are sure of those that can cover up for their lies to Nigerians. The victims are Hausa, Igbo, Yoruba and every other ethnic group of Nigeria. Go to the market and hospitals and tell me the ethnic distributions by discrimination in poverty, diseases, Economic and social hardships.  There are conflicts on most areas of our national life while smaller nations around us with less resources than we have are making mockery of our Nation and people.


We must look at the past,  deal with the issues, and ensure they do not determine our considerations in national affairs if we are to make the needed progress and record national development. 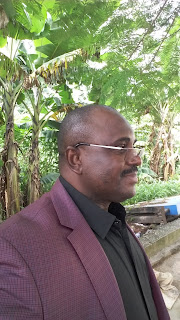 I guess the reputations of Shekau and men in his mould must have been desacrated by stained hands with human bloods. The senseless crusade of evil by the terror leader has claimed over 20 thousand human lives and brought hardships to communities in Nigeria.

Nevertheless I kept pondering how a sane person could conduct his affairs and act in such manner yet men and women would pledge their loyalties to him. I certainly know that apart from terror and violence, his followers were attracted by certain leadership qualities.