I have tried to hold my thought and views on the ethnic insinuations of my kinsmen that we are being marginalized. It is equally pertinent to note that Ndigbo are being subjected to ridicule and humiliation deliberately or otherwise but the question remains; by which people?
Which group of person or ethnic nationalities can we point at their actions or inactions as the tribes that hate Ndigbo. The failure to identify the actual adversaries could lead to unending social backlash and preempt political hostilities which is almost evolving to full blown ethnic conflict.

Ndigbo are found dwelling peacefully among all ethnic nationalities in Nigeria. In fact there is a popular saying that if you visit any tribe or community and cannot find an Igbo man, your safety is not guaranteed. The Igbos have successfully woven themselves into the fabrics of communities and cultures every where in the world through our economic activities and if you cannot find an Igbo man in a community, town or country such place must truly be unprofitable and unsafe for human abode.


The problem then could be a politically motivated conflict of interests. Though most Igbos reside in great numbers outside the Southeast due to the quest for economic actualization.  As our population grew so also did the necessity to participate in the socio-political and cultural demands increase.

Unfortunately other ethnic nationalities cannot boast of similar population in the Southeast and therefore sees no necessity to turn on the agitation for recognition and ethnic equality in the East. They also have no consequential economic interests in the South East and therefore see nothing to loose in the East while the contrary is the case with Ndigbo.
Secondly, the economic interests in terms of investments is non existent and therefore does not warrant other ethnic groups moving to the east except for those in public or private sector service postings. The South East does not host considerable investments from non indigenes. Groups like Dangote, PZ, Cadbury, Lever Brothers have no factories in the South East despite over 70% of their major distributors and possibly 80% of their vendors coming authoritatively from the South East.
A popular Igbo adage that says "when an elderly woman falls twice, she calculates the number of teeth that remain in her mouth". The Igbos have exhibited undue nonchalance on matters of common interest while aggressively in pursuit of exclusive rather than mutually beneficial interests. We seem to have forgotten the proverb that says "Na ana esi na ulo amara mma puta na ezi" meaning that our public perceptions or beauty is the content of our home or family good values.

The blame game can go on so long as we fail to humbly admit our lack of unity, accountable, visionary and selfless leadership, disregard for institutions, envy and contempt for our fellow Igbos, and outright contempt for honesty and hard work. No society tolerates such conduct and attitude in their communities. No not even in Igbo land. Every Igbo man or woman must first of all be a worthy ambassador of his or her immediate family, community and ethnic nationality. The Southwest is being developed by Yoruba and the same goes for the North. We have Igbos with the capabilities of building solid socio-economic and political structures which are all inclusive and mutually beneficial. We must discourage greed and dishonesty. Our traditional institutions must equally purge itself of fraudulent and questionable interests. The breach in values must be checked and severed consequences administered as deterrent to those with criminal dispositions. Our culture of respect and honor to godly elders must be revived then other  tribes will respect us. We have no reason whatsoever to court the endorsement of anybody or seek to be approved or accepted by other tribes or society. We do not owe anybody any explanations but we should be able to give a good account of ourselves and earn honor and respect from others. We surely stand eyeball to eyeball with any society we have good reasons to do business with. We Ndigbo are our own greatest adversaries. "A stitch on time saves nine"
Hausa Leadership Ndigbo Nigeria Politics and Politicians president Socio-political and cultural Southeast Unity Yoruba 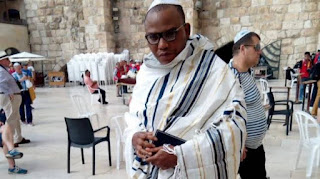